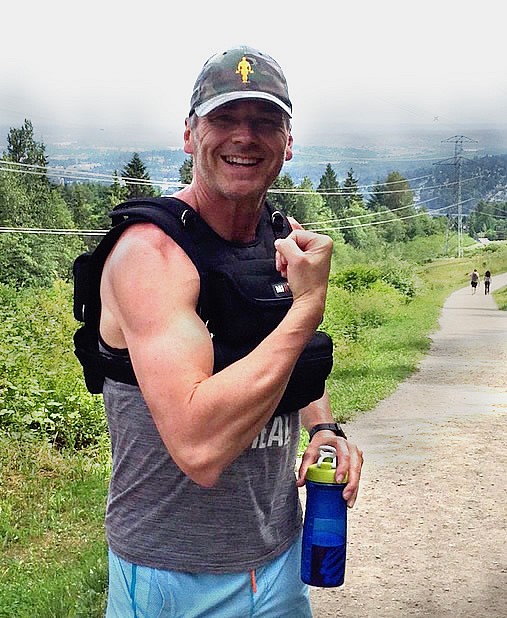 Let me introduce myself. I am Doug Morneau, a husband, dad, uncle, and co-founder of Q4fit.com.

In 2011 I was FAT, out of shape, on six different medications for hypertension, high blood pressure, high cholesterol, and using a CPAP machine when I slept. Diabetes runs in my family, and my internal medicine doctor said if I were to get diabetes I was a dead man.

Well, in September of 2011 I came down with double pneumonia, was put on medication, steroids, and confined to bed by my doctor.

Three months. Three months I slept 20 hours a day and did not have the lung capacity to walk up a flight of stairs to get to our bedroom without a long rest at the first landing, followed by another long rest once I reached the top of the stairs. An ascent which left me on my hands and knees gasping for air wondering if I was going to die.

It nearly killed me, and the doctor later admitted that I was worse than she thought and should have been hospitalized.

Two months later (November), I was only allowed to work two hours per day including my commute.

By this stage, I'd had ENOUGH! In the last week of November, against the doctor's recommendation, I said: “I'm going to go to the gym and get healthy.” I started by asking for references to a good trainer, one with a proven track record. Heather and I drove to the gym to meet our prospective trainers and basically said, "We're done being sick, overweight and unhealthy". We interviewed each other. At the end of our first meeting, I told Dean (one of the trainers) "I'll commit to doing whatever you tell me. I'll keep the schedule, do the work ... whatever it takes. I'm deadly serious!"

I'm not sure he believed that I could or would make it.

Fast forward to now ... I've reached my weight goal and am working on my body fat percentage goal of 9-10%, and specific lean muscle building goals.

I am 100% medication free - all gone, goodbye! The doctors are all shocked and keep asking me how I did it?

It's really simple. I've walked 1000 miles in the shoes of those fighting the same battles with weight, medication, struggles, motivational challenges, the haters who don't want you to succeed plus the time and financial commitment to see this through.

Today, I pledge to make a difference in your life. Whether it's through educational information, motivation, someone in your corner cheering you on, guest bloggers, podcasts, social media, and whatever medium, I will do my very best to support your journey.

So, all I'd ask is this, won't you at least consider joining me on a journey, a lifelong journey that starts with one day? Just one day at a time.

I’ll believe in you. Will you?

I was an active kid and teenager. But as most people can relate to, after school ended, so did most activity levels. As I went through my twenties, I had babies and never really went back to pre-baby weight. So by the time I was in ...